Everlast is the largest and most experienced manufacturer and builder of concrete water tanks in Australia with over 40 years of continuous experience in supplying for the water storage needs of Australians.

There are over 20,000 Everlast water storage tanks in service, ranging in capacity from 10,000 to 235,000 litres.
‍
Everlast Concrete Tanks started supplying concrete water tanks in South-Eastern Australia during the 1960’s. Initially, all tanks were built at the site, even small tanks of around 20,000-litre capacity.

In the past, onsite concrete tank construction required a team of at least three persons who had to spend long periods away from home, travelling from site to site, often working in difficult weather.

With the introduction of New Zealand’s cement-mortar tank technology to Australia, Everlast was quick to recognise that for small to medium sized tanks, factory production provided a cheaper alternative to poured-onsite construction. If a tank could be transported, it could be built more efficiently in a factory environment than out in the field. Delivery and installation of a factory-produced tank were simpler than building one at the site. There were other advantages as well. For example, one man can deliver a transportable factory-built tank whereas three men must travel to build an onsite tank. The quick onsite turnaround is more convenient for customers. 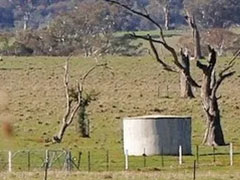 Our farmers and property owners clearly agree on one thing – that concrete is a natural choice when it comes to storing water. 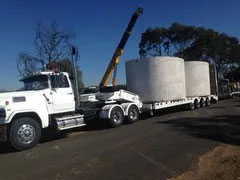 Used for fresh water, salt water, wastewater and sewerage – and when lined can be used to contain corrosive chemicals. 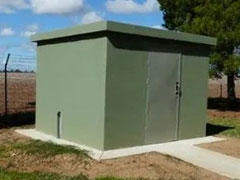 Everlast built its first production factory in 1971 and began delivering throughout Victoria and NSW. The Everlast transportable tank soon became hugely popular because of its neat appearance, robust construction and long-term durability.

In the mid-70's, Everlast's founder sold the business to an Australian major and retired. Two years later, the Everlast marketing and management team resigned from their jobs to start their own fledging company, Economy Concrete Tanks.

By 1995, Economy was such a market leader that its holding interests bought out Everlast.
The partnership that owned Economy then split and have operated individually, providing transportable tanks and other products throughout Victoria and NSW.

Each focuses on their traditional geographical areas where their respective names are better known.

We have designed and delivered high-quality tanks for years

In recent years, Everlast has expanded its range to include onsite tanks to fill a need in the market. Our transportable division has broadened its delivery area to include all of NSW, VIC and beyond.
‍
When you purchase an Everlast Tank, you can have total peace of mind because you have bought a quality product that will last you a lifetime. Over the years, we have seen many tank companies come and go, but you can rely on Everlast Concrete Tanks - we're here to stay! Our warranty is our experience, knowledge, good name and the assurance that we have been here for many years and will continue to be around for many more to come.

If you have any questions or are after some no obligation advice, please call Everlast today.

We can custom make a tank for your specific needs

We are always happy to meet your concrete needs, so give us a call! We will help you understand and choose what the best water storage option is for the type of liquid you want to store.

Please give us a call today to talk to one of our team members. We will be sure to find the right solution and tank for you!